Safari has developed what is arguably the ultimate in maximum efficiency exhaust systems for the armoured vehicle industry. Precision manufactured in true 3” tube for high gas flow capacity, Aluminised steel for corrosion resistance, mandrel bent for maximum flow efficiency and 4-bolt flanged exhaust connections for high strength, unmatched fatigue resistance and a lifetime of leak-free operation. Moreover, the Safari Exhaust System has been designed for the maximum clearance to vital components, zero contact with body and suspension and installation is a breeze.

The increase in maximum gas flow through removal of the standard system’s restrictions results in the significant power increases shown without the usual increases in exhaust gas/cylinder head temperatures.

The result is a superb exhaust system that delivers almost 100% improvement in exhaust gas flow capacity and with the added benefit of exhaust sound levels close to that of the stock vehicle.

The Safari Exhaust System compliments the Intercooled Turbocharger System resulting in a thoroughly engineered turnkey system designed to deliver the highest possible engine durability at 200 horsepower (SAE NET) and addresses the specific requirements of powering the 5500 GVM of a fully armoured 76 series carrying ten passengers, in ambient conditions from minus 20C to plus 50C.

Oops! We could not locate your form. 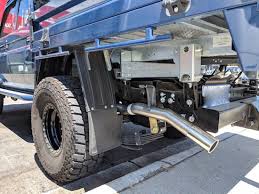 MANTA Exhausts
BACK
BROWSE BY CATEGORY
↑