The new BP-51 range of high performance, bypass shock absorbers is the result of an exhaustive development process aimed at delivering the ultimate in both comfort and control. Designed, developed and tested entirely in-house by ARB’s team of Old Man Emu ride engineers, BP-51 shock absorbers are vehicle specific and utilise existing mounting locations to provide easy installation without the need for additional vehicle modification.

Unlike most other adjustable shock absorbers, which provide adjustment for compression only, the BP-51 range allows on vehicle, independent adjustability of both rebound and compression to offer class leading ride customisation that can be tailored to individual vehicle or trip requirements. In addition to the velocity sensitive damping used in most shock absorbers, where the faster the piston moves, the higher the level of damping is generated, BP-51 shock absorbers also generate damping dependent on the position of the piston within the shock absorber’s body via their bypass design.

While most shock absorbers only generate damping based on fluid flowing through the piston, the BP-51 offers an alternative path from one chamber to the other, around the piston in the form of bypass passages. Some fluid flows through the piston and some fluid bypasses around the piston in the bypass passages. This results in an ability for the shock absorber to provide the best of both worlds, with a comfortable and compliant ride during normal driving and a more controlled ride over more challenging terrain. With greater levels of damping generated at each end of the stroke, the piston slows as it approaches full compression and extension, preventing harsh topping out against the bump stop and allowing larger bumps and corrugations to be absorbed more easily. 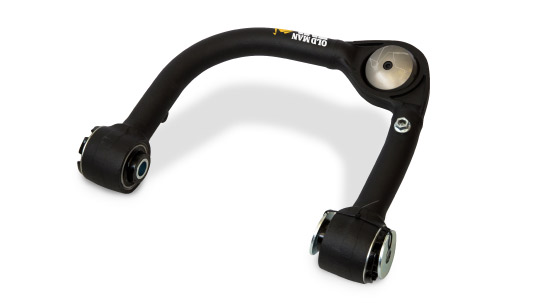